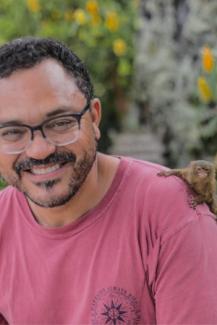 Marcos Colón received his Ph.D. in Spanish and Portuguese Cultural Studies from the University of Wisconsin-Madison in 2019. His research focuses on Brazilian literary and cultural studies, with a particular emphasis on representations of the Amazon in twentieth- and twenty-first-century Brazilian literature and film. He is currently working on a book- project based on his experiences filming the Amazon. He has produced and directed two documentary films that represent diverse perspectives on humanity’s complex relations with the natural world: Beyond Fordlândia: An Environmental Account of Henry Ford’s Adventure in the Amazon, 2018 and Zo’é, based on his experiences with the Zo’é tribe, an Amazonian indigenous community that has had little to no contact with the outside world (2018). He is particularly interested in examining a variety of perspectives on the post-rubber era in the Amazon. Colón’s scholarship uses the post-rubber era as a springboard for re-envisioning the region in a “relational” way, challenging hegemonic representations of the tropics in literature and culture. He is the editor and creator of Amazonia Latitude, a digital environmental magazine.