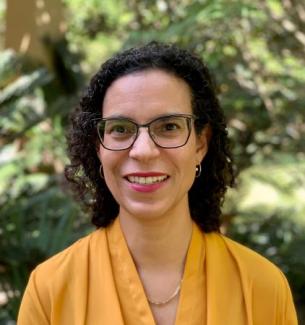 Professor of French, Aimée Boutin  received her Ph.D. from Cornell University and her BA from Carleton University in Ottawa, Canada. She specializes in 19th-century French poetry, women writers, cultural history, gender studies, art history, soundscapes and the city in literature. Dr. Boutin has a long-standing interest in voice and sonic representations. Her first book examined how the mother’s voice was imagined differently by male and female French Romantic poets. Her research continues to explore representations of women’s voices in society; the topic was the subject of the Women in French 2018 conference on “Le bruit des femmes.” Her book, City of Noise: Sound and Nineteenth-Century Paris focuses on the flâneur, the senses, and city noise in nineteenth-century Paris. Her current research grows out of her work on gender and walking in the city and analyzes how the railway expanded freedom of movement while imposing and exposing gendered norms on female travelers.

Dr. Boutin’s interests in historical, interdisciplinary, and gendered perspectives pervade her teaching at both the undergraduate and graduate levels. She has directed undergraduate honors theses, MA research, and Ph.D. dissertations on topics ranging from 18th-century and 19th-century studies to postcolonial ecocriticism.

Associate Chair (2004-2008) and French Program director (2008-2019), Dr. Boutin served as the book review co-editor for the journal Nineteenth-Century French Studies (2012-2019), and co-organized the international conference NCFS 2019 in Sarasota. She has actively been involved in NCFS, as well as the Modern Language Association and Interdisciplinary Nineteenth Century Studies. During her sabbatical year (2020-2021), Dr. Boutin was a fellow at the Collegium de Lyon, France where she collaborated with researchers in several interdisciplinary humanities labs, including the Institute for the History of Representations and Ideas in the Modern Era and the group Triangle. Action, Discourses, Economic and Political Thought (which has an axis on urban studies). She was also part of a working group on the history of the senses and sonic heritage, collaborating with soundscape and sensory studies researchers.

The Romantic era in France and the July Monarchy

Interdisciplinary approaches to literature, literature and the other arts, art history